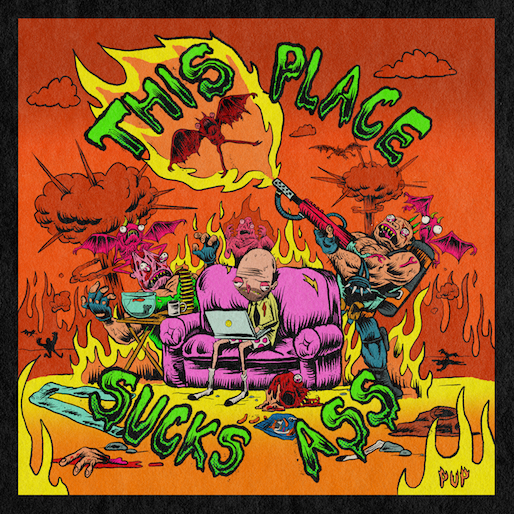 PUP made waves with Morbid Stuff last year; their award-winning third studio album pretty much made it onto every end of year list, coming close to topping several as Album of the Year, and deservedly so. They had leaned further into that off kilter indie punk vibe that they may as well trademark and we’re glad to see it continue on this EP. Makes sense too, given that half the EP is leftovers from the acclaimed album.

This Place Sucks Ass – like Morbid Stuff would be a prediction of what was to come thirteen months later – is truly an apt title for a pandemic release and although it does have that sort of gloomy lyricism that Stephen Bacock is so fluent in, it’s a generally happy sounding thing that incorporates a ton of merry instrumentals and almost musical theatre-like singalongs.

All except the final two tracks. Both have a slightly more ominous edge;  the doomsday drums and slow chug of the guitar on ‘Floodgates’ definitely changes the mood, but they still flirt with the uptempos in choruses, which causes a really interesting contrast and makes it our standout track. It also allows the transition into ‘Edmonton’ – a quick one minute track – to be much smoother. The latter is the ‘Full Blown Meltdown’ of This Place Sucks Ass – you just want to let your hair down and circle headbang and that’s a fantastic note to end an EP on.

Not that it’s news to anyone, but PUP prove once again that they’re an unending well of creativity, talent and spirit. This place might suck, but at least we’ve got PUP.

Stream This Place Sucks Ass by PUP below: