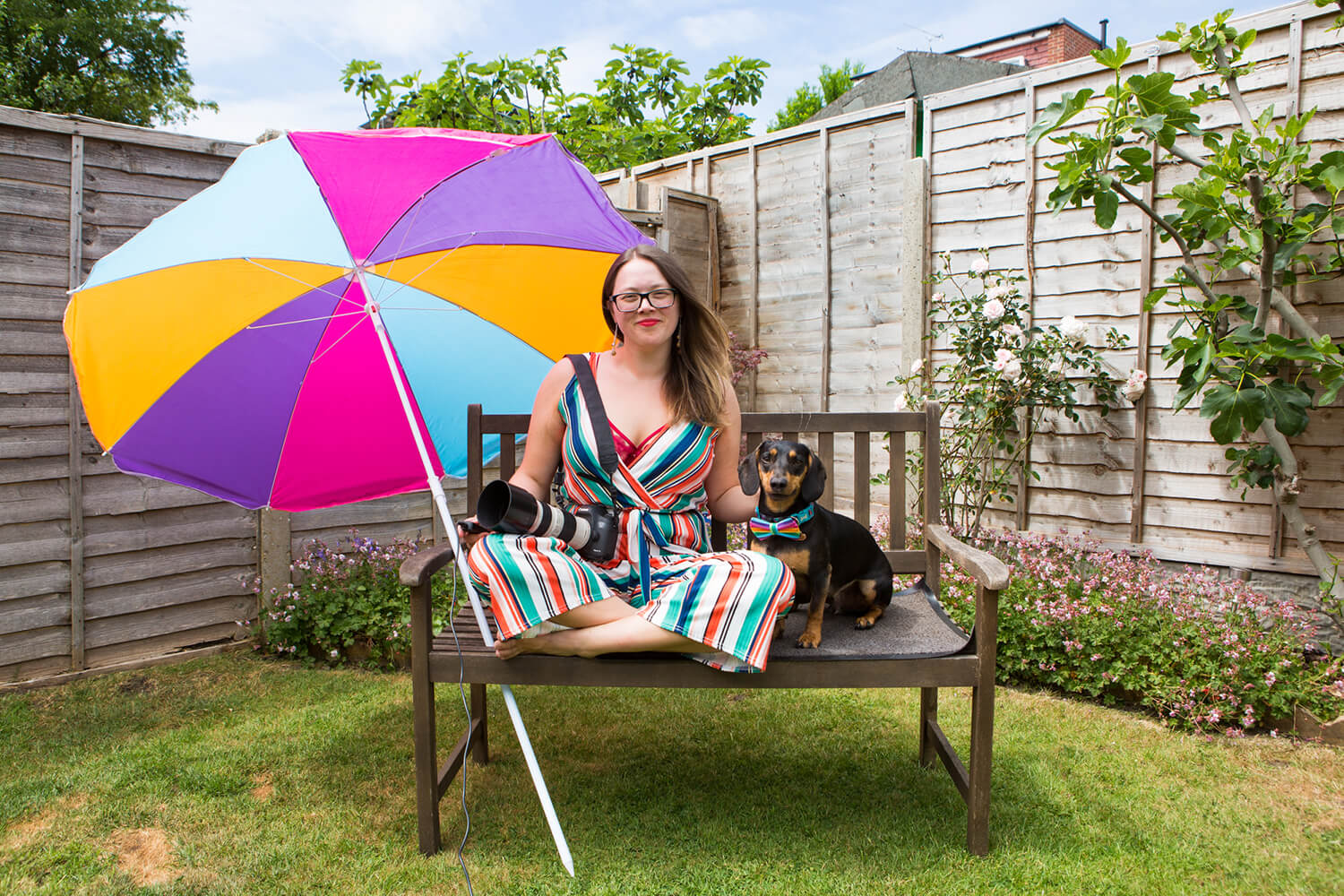 For editing, I use Lightroom to do all of my colour correction stuff and for anything more – like skin tones, blemishes, and stuff like that – that goes into Photoshop.

You started taking pictures from 15/16 years old, but what got the ball rolling? How did you get into photography?

I really wanted to do photography GCSE at school and I was basically told not to do it, because the art teacher thought I wasn’t good enough for an art GCSE, but my parents had bought me a little camera that I could use for GCSE. So I was just taking photos of everything I could and when I was old enough to go to gigs and stuff, I got a Nikon Bridge camera – so it didn’t have any interchangeable lenses or anything, but it was better than a little point and shoot – that I could take to shows – these were all little gigs in Camden.

When I went to university, Banquet Records had a stall in the Freshers Fair and I asked them if they needed anyone to shoot anything and they replied saying, ‘yeah, we need someone to shoot our club night on a Friday night if you want to do that, it’s £20 an hour if you wanna do that’ and I was like, yes I do! I’d never been paid to take photos. So yeah, I did that for a while and part of the perk of that was that they let me shoot the shows that came through there as well as shooting the club night, so that’s how I built up my portfolio a bit more. When I finished university, I spent time getting to know people in the industry and really networking, so that I could come straight out of university and start shooting as my full time job. I wasn’t making a ton of money then, but it was definitely enough to live off. 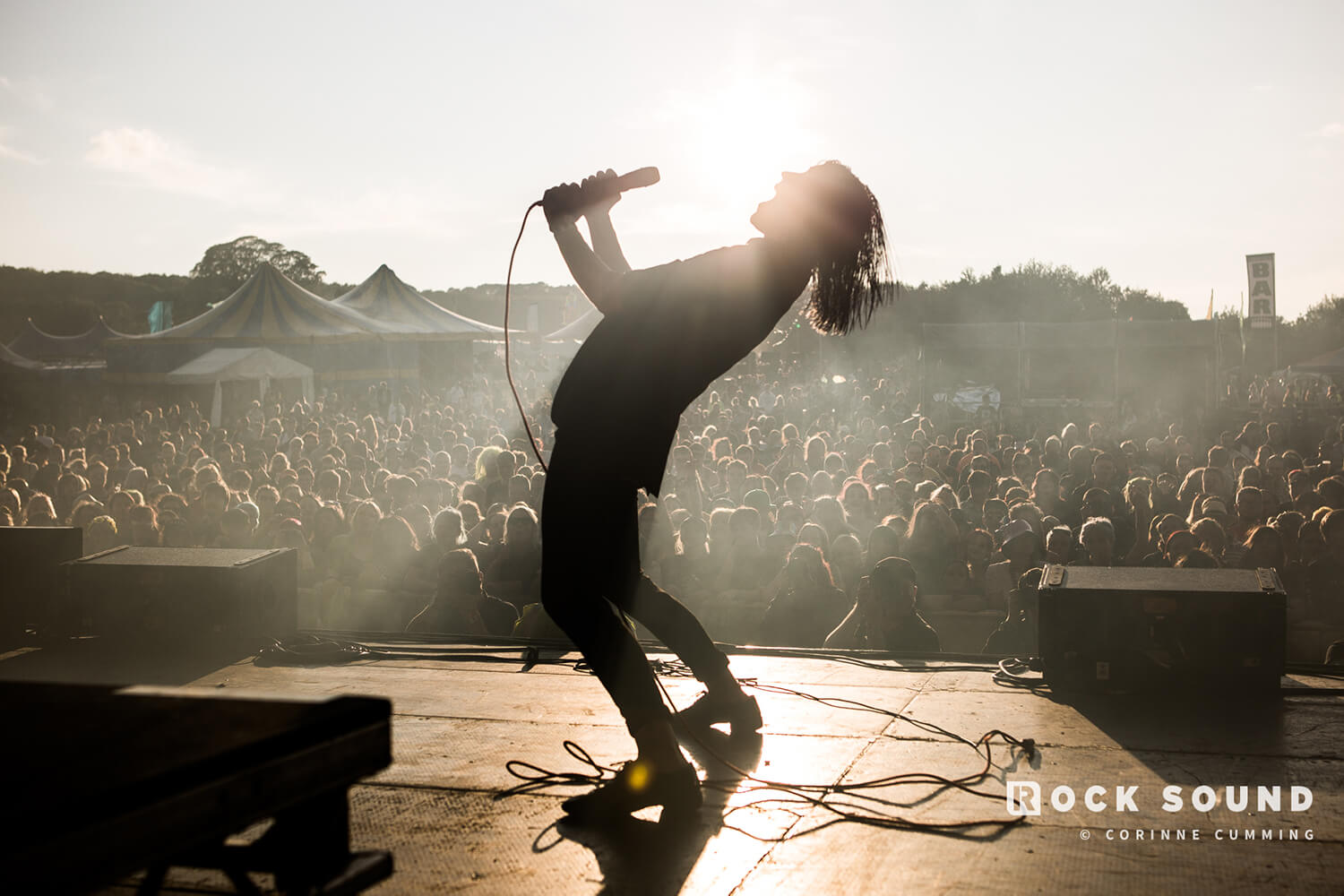 “Being nice and kind will get you a lot further than you think and I’d say that’s my one, biggest piece of advice.”

I think that’s a big thing for aspiring photographers to take away from this – just take your shot. Like you said, you asked and that turned into something that also led to other opportunities.

The one thing I’d say to people is you’ve got nothing to lose from shooting your shot, so always ask, because what’s the worst that could happen

Speaking of new starters, what would say the least amount of gear is that they can get away with, considering you only had a point and shoot.

So yeah, I used to have the Nikon Bridge, but I think when the point and shoot died on me, my family got me the Nikon Bridge camera. I think they’re about £100 or something like that, but they’re not crazy expensive, so that was fine, but it doesn’t allow you to change a lot of the settings yourself, but it’s good if you don’t have a lot of money. If you have a little bit more money, I’d say to go for a lower range Canon or you could probably get a Bobby 1100d for £200 – £300 or even less if you get it second-hand and that will give you a choice on settings that you won’t get on a Nikon Bridge camera.

Okay, so now we have our camera, we’ve taken some shots and built up a bit of a portfolio – what’s the next step? What is the process of, say, getting a photography pass?

I think the best thing to dip your toe in the water, is just to find local gigs that are being put on by local people and just ask if you could shoot the show. I’ll give you the photos in exchange for letting me in, which is exactly what I did. Once you’ve done enough of that, you can go and use that emailing online publications asking them if they will take you on, which again is what I did. It’s usually unpaid, but you gain the experience and from there you gotta get paid to do it. You kinda have to reach the right place and there are a lot of publications that don’t pay, but there are some that do and you gotta scout about and send in your portfolio if you think it’s strong enough. I would suggest getting other people to give their harsh opinions on your portfolio, because you don’t want to send it to someone if it’s not good enough. So yeah, it’s best to send your portfolio around, message bands to find out if you can shoot for them.

Last question in the ‘advice section’ is any other tips?

I would say, be nice to everybody. Don’t be an asshole. There had definitely been times in the industry where  someone had thought that I was below them and they’ve been rude to me and then a couple of years later I’ve gotten further, but I’ll never forget the way they treated me. Always be nice, because you never know who someone’s gonna be – not only that, but you’re less likely to get jobs if you’re – people always think of nice people who are good at their jobs first before they think of the assholes who are good at the job. Being nice and kind will get you a lot further than you think and I’d say that’s my one, biggest piece of advice.

Being nice to people is probably a good rule for life, but you’re the third photographer who’s given that tip.

Really? It really does happen so often. Maybe I’m treated like that less now because people think of how hard I’ve worked and where I am, that I’ve worked with bands that are worth talking to  but when I was starting out, people were really rude to me and I’ll always remember who those people were. It doesn’t matter who you are, you’re not better than anyone, we’re all the same. If someone is coming to you asking for help or even if you meet someone in the pit who wants to talk to you-

I remember the first time I was in a photo pit with Paul Harries – I was losing my mind, because Paul Harries – he’s the guy whose photos were on my wall when I was 12 years old. He was the kindest person. If Paul Harries, who is the biggest legend in the photography scene can be nice to people who are just starting, then literally anybody can. 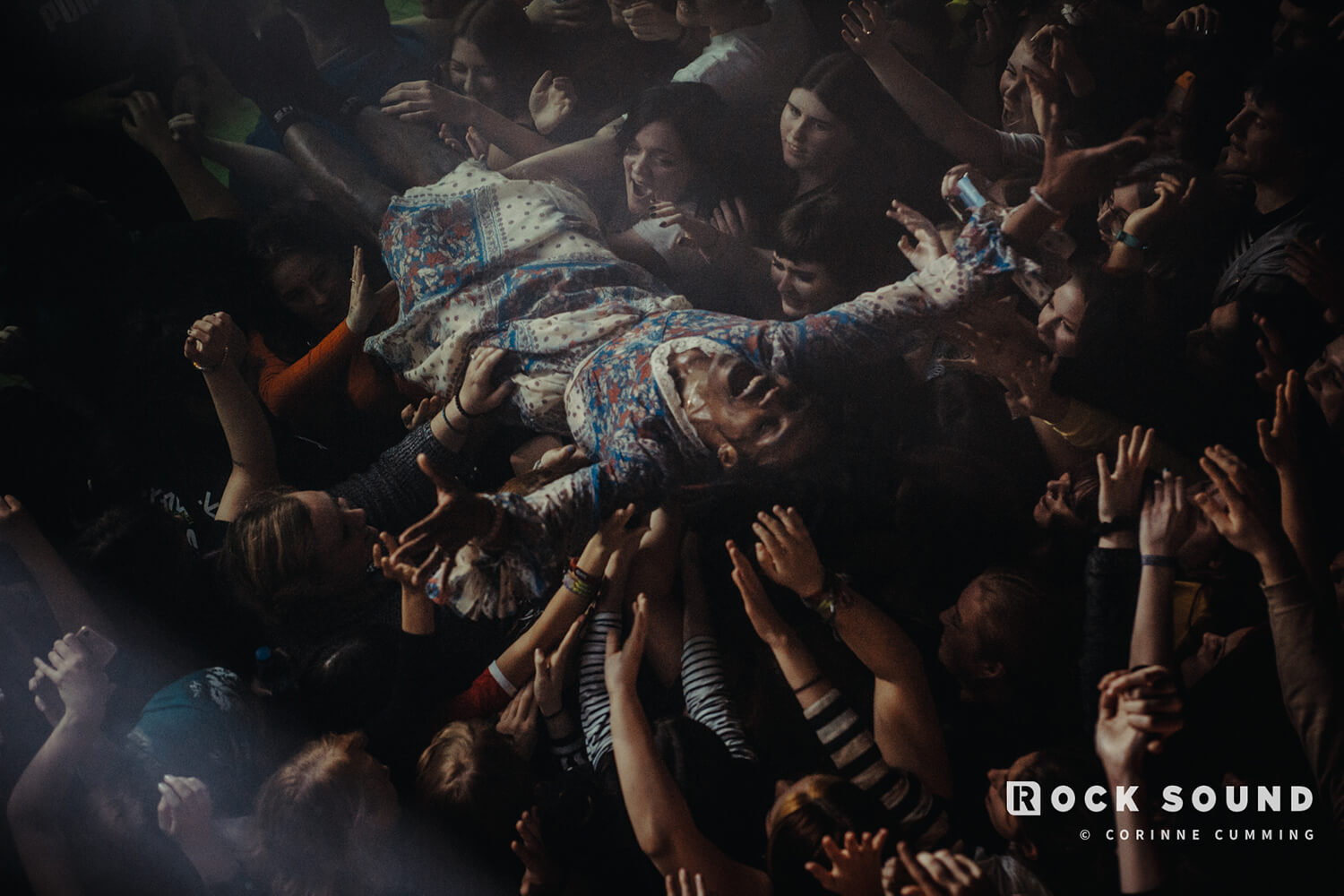 That’s a good segway into our next question. If you could have dinner with five people, Paul Harries can be one of the five, who would it be?

Five people? Okay, Paul would be one. This is hard.

So that’s three, who else? This is so hard. Lizzo and Sandra Oh. 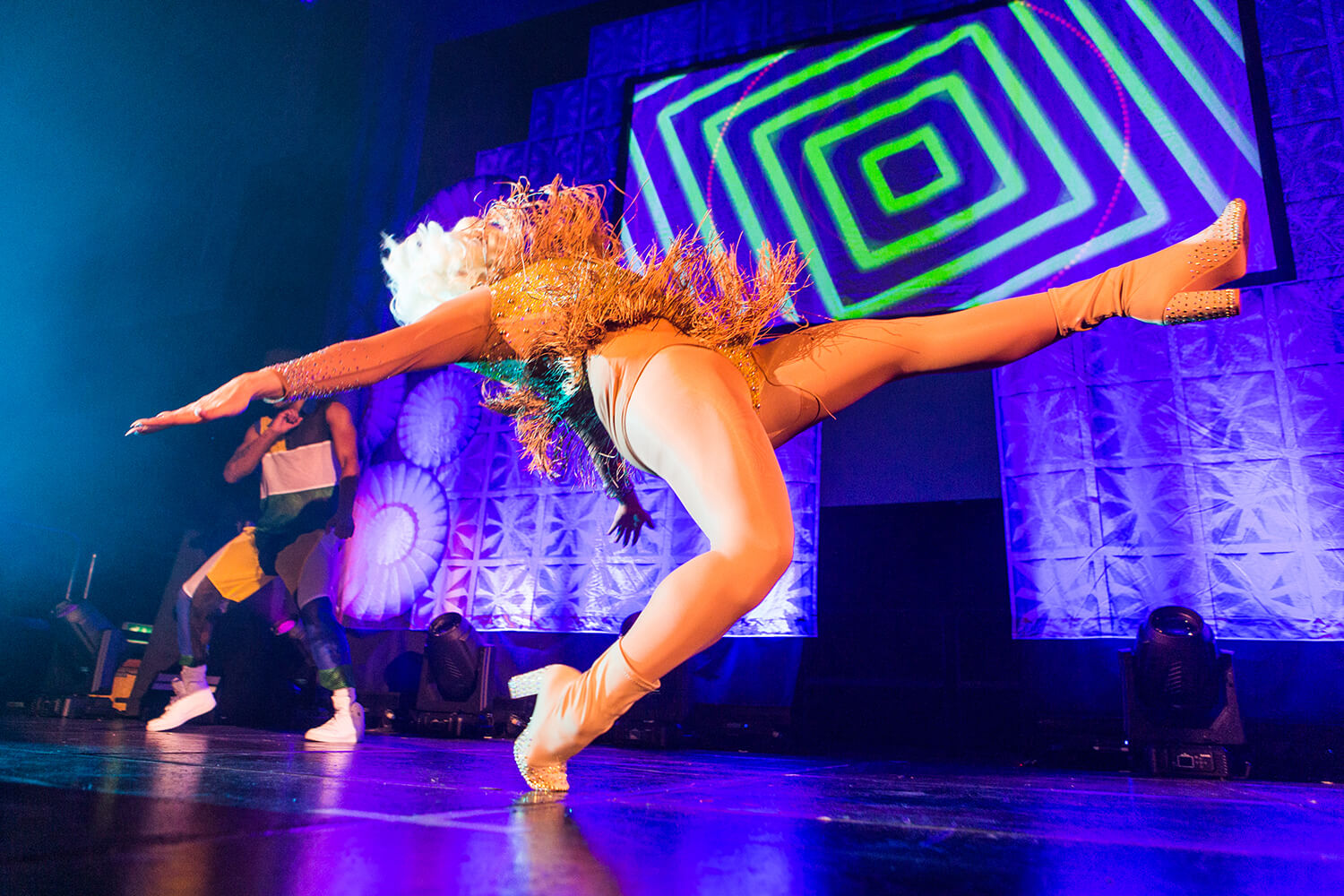 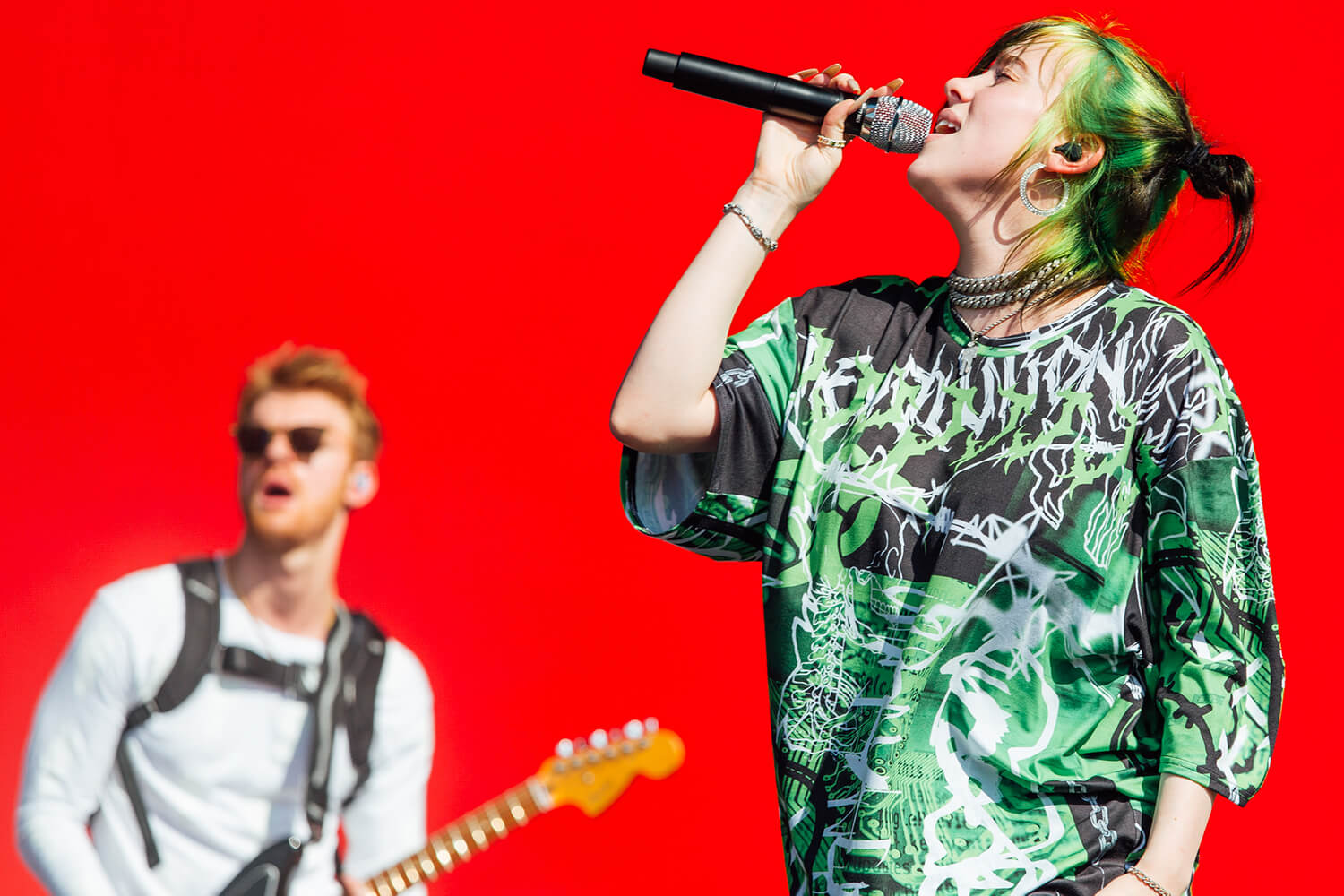 This is probably going to be just as hard, but if you had to pick one of your favourite pieces of work with us, what would it be and why do you love it so much?

This is so hard! I have a couple of different ones that are my favourite. There’s one I took of Patty from As It Is at 2000 Trees Festival last year where he’s on stage and it was golden out from the sun setting and it’s a silhouette of him screaming into the mic and I think that’s my favourite live music shot. Although a lot of people might say that my best live music shot is of Brendan Urie that I won an award for, but I took that so long ago that I just don’t like it anymore.

There’s also another photo I took of Dwayne Jackson and he was supporting, I think it was Waterparks in London in Feb and he stage dived onto his back into the crowd and he’s got his arms outstretched and I love that photo.

And then in terms of my drag stuff, there’s a picture I took of Cheryl Hole in the middle of a death drop and that’s probably one of my favourite photos.

It’s really hard, because I have so many favourites, can I do five?

Also, these pictures of Billie Eilish and The Bitten Peach.