Behind the Lens with Chux on tour photography

Behind the lens with Chux on tour photography

Charlotte aka Chux On Tour Photography is a Berlin-based music photographer with a strong focus on female musicians. Her happy place is at showcase festivals where she can discover upcoming artists. Before becoming a concert photographer, she worked with musicians, taking care of their social media campaigns, helped out with artist and tour management, booking and promotion and even put on some shows in Berlin. She‘s part of the female collective GRRRL-NOISY and recently founded SHOWGRAPHERS, a platform to connect musicians and music photographers. 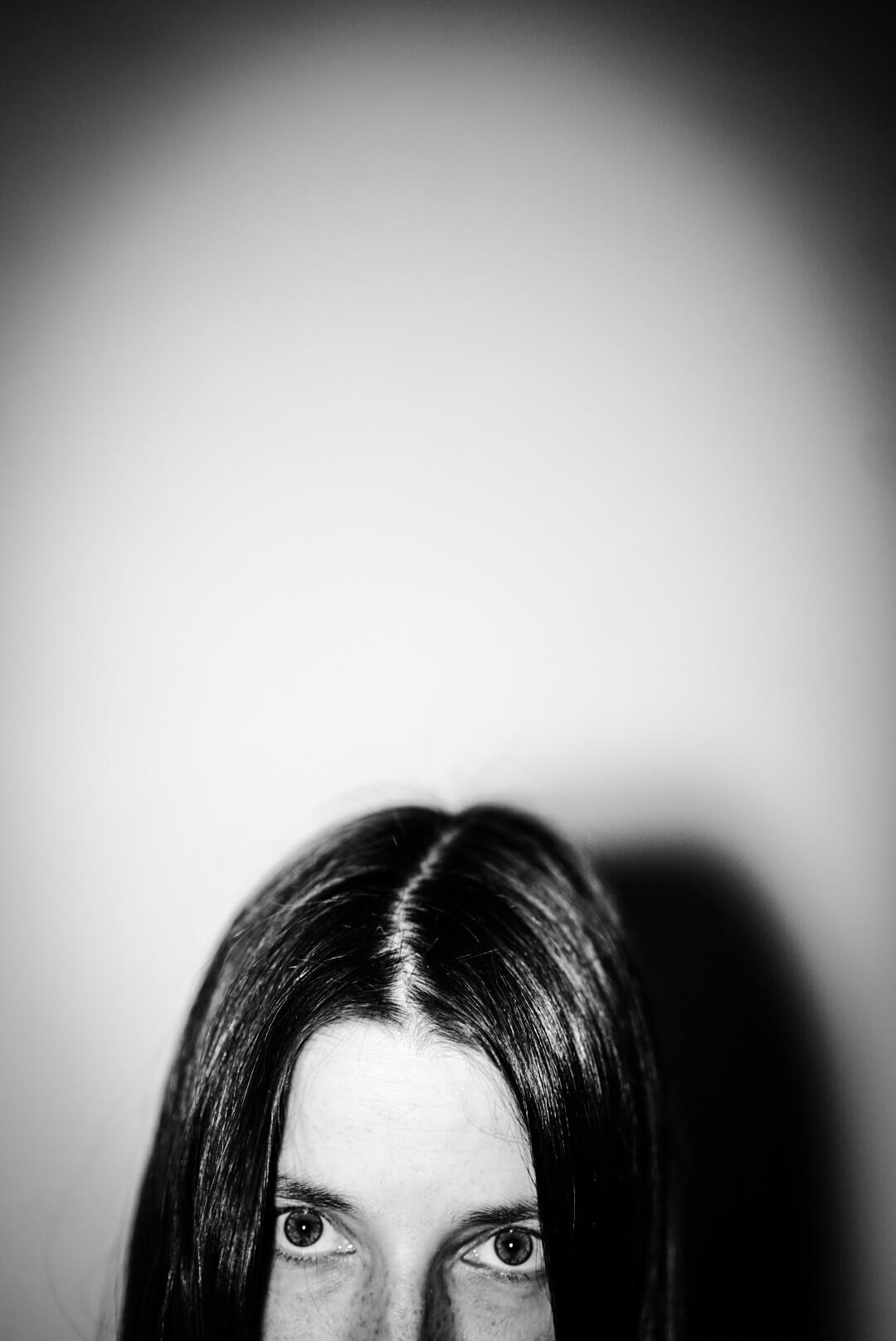 My first proper camera was a Fuji XT-30 but I switched to Sony Alpha 7iii last year. My most used lens is probably the 50mm (SEL55F18Z), but I also love my 85mm (SEL85F18), especially for portraits, and don’t want to miss my 35mm (SEL35F18F) for the small gigs. I carry my camera in a Lowepro hip bag which I usually wear on my back though, this way it sits tight to my body and doesn‘t wobble around. For editing I use Lightroom Classic on my Mac. When I’m at festivals I often use Photoshop Express on my phone so I’m able to already post some pictures in between gigs.

By accident. Yeah, it wasn’t planned. Though in hindsight it makes so much sense. I always went to gigs and loved photography. It wasn’t until my boss (from my office job) told me I should write about concerts because I go to so many of them. But since I never really enjoyed writing that much I just posted the crappy pictures I took with my phone on Instagram. It was more of a personal diary but small bands wanted to share them anyway. Then one day I got a message from the German music blog hoers.de and knew I had to step up my game. I fell in love with shooting concerts from the first moment and going to a gig without my camera doesn’t feel right anymore. 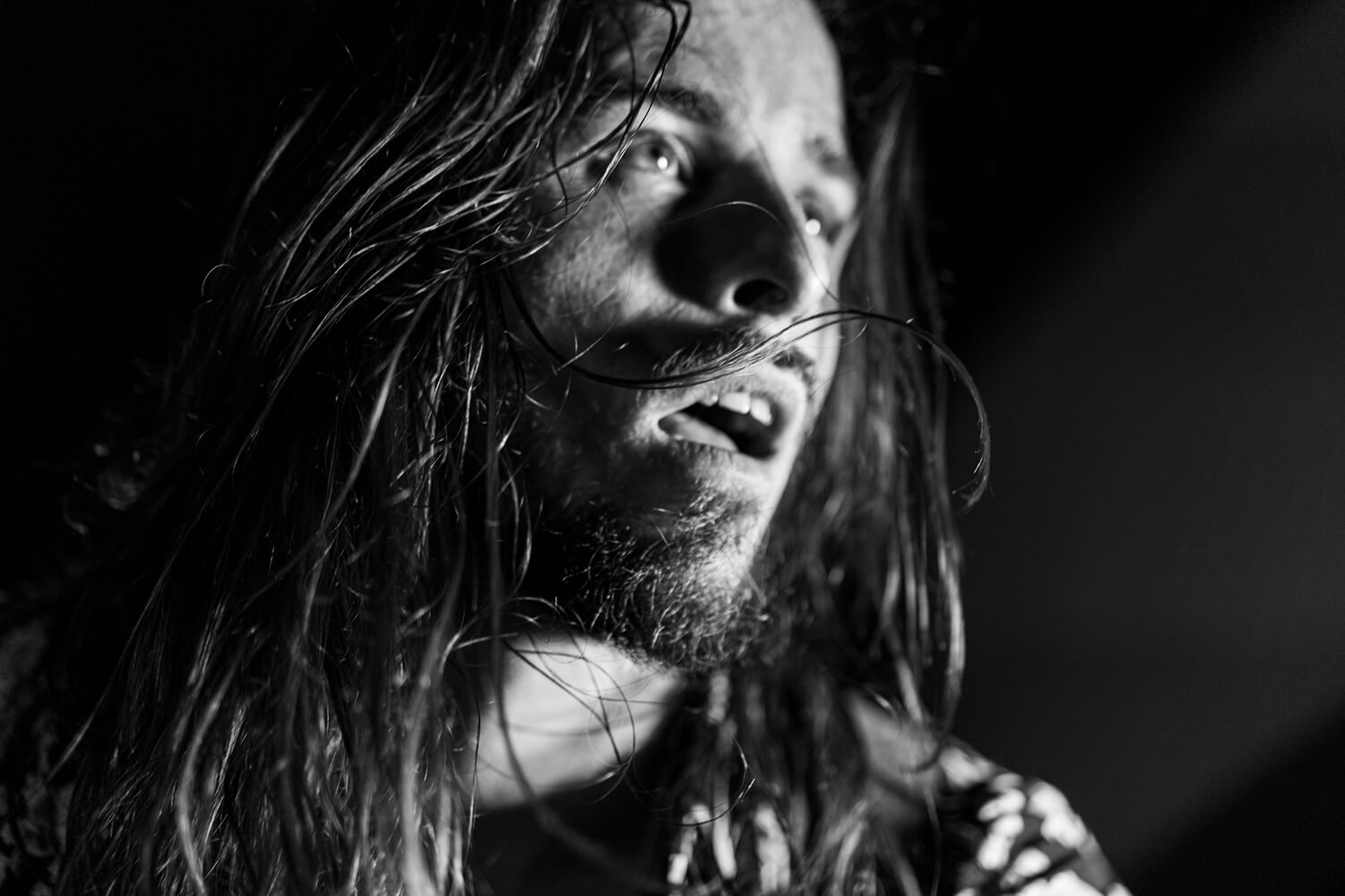 To be honest I actually started off with a small compact camera (Canon PowerShot G7 X Mark II). It was easy to use and I could sneak it into most venues. Yes, the quality wasn’t spectacular, but it was enough to post to Instagram and the most important thing for me was to figure out if concert photography really was something I wanted to pursue and if I have an eye for capturing live music. If you already passed this stage and you’re sure you want to become a concert photographer, you can start with a cheap DSLR and a 50mm f/2.8 lens. Focus on the moments and emotions and learn how to use the camera settings to your advantage because the automatic mode most likely won’t deliver the results you’re looking for. And I also recommend getting into editing because you can change the whole mood of a picture and fix a lot of things.

This depends on whether I work with a band directly or take pictures for the music blog. When I was starting out I simply contacted the bands on Instagram. I made sure I followed them and maybe commented on a picture or a story before getting in touch so they might already have seen my name popping up. The good thing when shooting for bands in small clubs, is that I usually take pictures throughout the set. After the gig I back up all pictures, pick my favorites (usually too many), edit them and send a download link to the band.

When I started writing for a music blog this process obviously changed. Promoters send us a weekly or monthly overview of their concerts and I am in the lucky position that nobody assigns me shows, but I can request press passes for the shows I want to see. Nevertheless, there is no guarantee and for various reasons you can’t go to every show you want to. On the evening of the gig I simply pick up my press pass at the door and go to the pit (if there is one) or get myself a good spot in the front. The downside of having a press pass is that I’m only allowed to take pictures during the first three songs and sometimes I’m even supposed to leave the venue after that.

On my way home I try to post a few videos and pictures that I edited on my phone in the Instagram story of the blog. And each month I publish an article with our upcoming concert recommendations and I also include a review of the previous month shows. I make sure to cover all the gigs I had a press pass for (except if I didn‘t like the show) and add a selection of my pictures.

This was such a tough decision! I’m gonna go with the picture of SKYND I took in January this year which I posted with the caption “This could easily already be my favorite picture from 2020”. Little did I know most of the shows and festivals I planned for 2020 would be cancelled. But then I actually found another one from the same gig. I just love the intensity and intimacy of it and the fact that she stands out from the background. 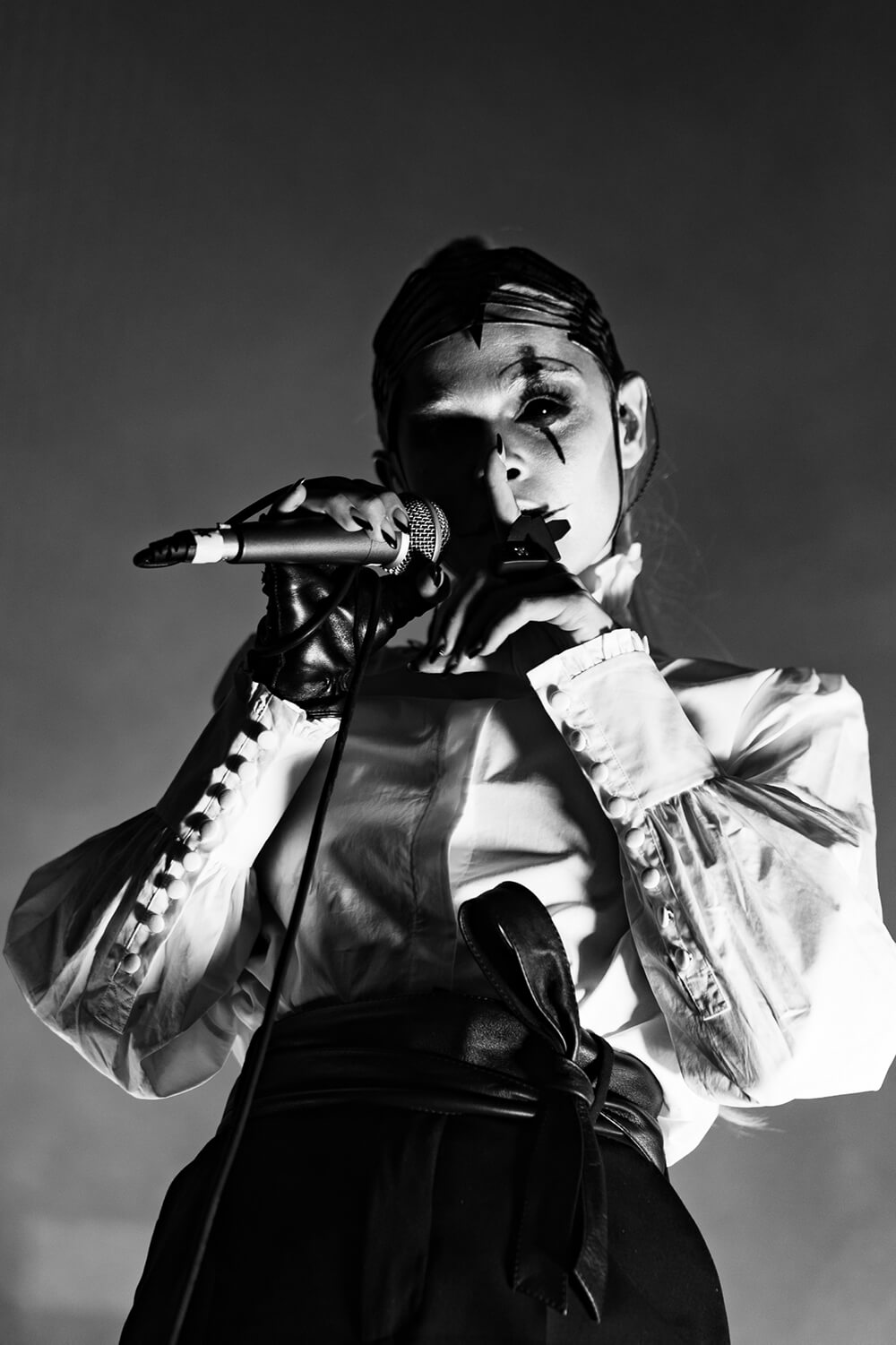 This question had me thinking way too much because it has so many layers, haha. When it comes to concert photography I don’t really get influenced by the work or style of specific people. It’s more the concert itself that gets me creative. And of course some of the performers inspire me more than others, but that’s more of a temporary inspiration. With promo shoots I draw my inspiration from different photographers each time, because you‘re always looking for a different mood and style that fits the band and the story you want to tell.

But if we’re talking about people I would want to meet because I like their style, I would definitely name photographer Andreia Lemos. Her style is just so different from mine and I love the rawness of her pictures. She obviously has a good taste in music as well because she worked with so many great bands that I love too. I’d also like to take the chance to recommend bands I’d like to see her work with. And as far as I know, she also does commissioned work that doesn‘t have her unique style and I would love to talk about this contrast.

An artist I would love to meet is the singer of SKYND. I discovered them at the ESNS Festival in 2020 and I was fascinated with her performance. I’d like to figure out how she controls the effects on her voice during shows and I’m sure she can tell fascinating stories about serial killers all night long.

Then I would also choose Sarah Paulson, hoping she would either allow me to take some portraits in between the drinks or take me to one of her sets to shoot some behind the scenes pictures.

Another name that came to my mind is Judy. I only met a couple of weeks ago, but from the very first second we got along so well. She asked me to teach her photography so we went on a shoot together and obviously she had an eye for good locations, angles and framing. And it was so much fun that we are already planning another shoot with a band in January. Oh and she’s also a good drinking buddy.

And my last choice is no specific person. But I would love to grab a drink with a creative and passionate woman who’s into music, photography and tech as much as I am, that would want to join the SHOWGRAPHERS team and brainstorm new ideas. Because generally speaking I’m inspired by working with or for people and projects that I believe in. 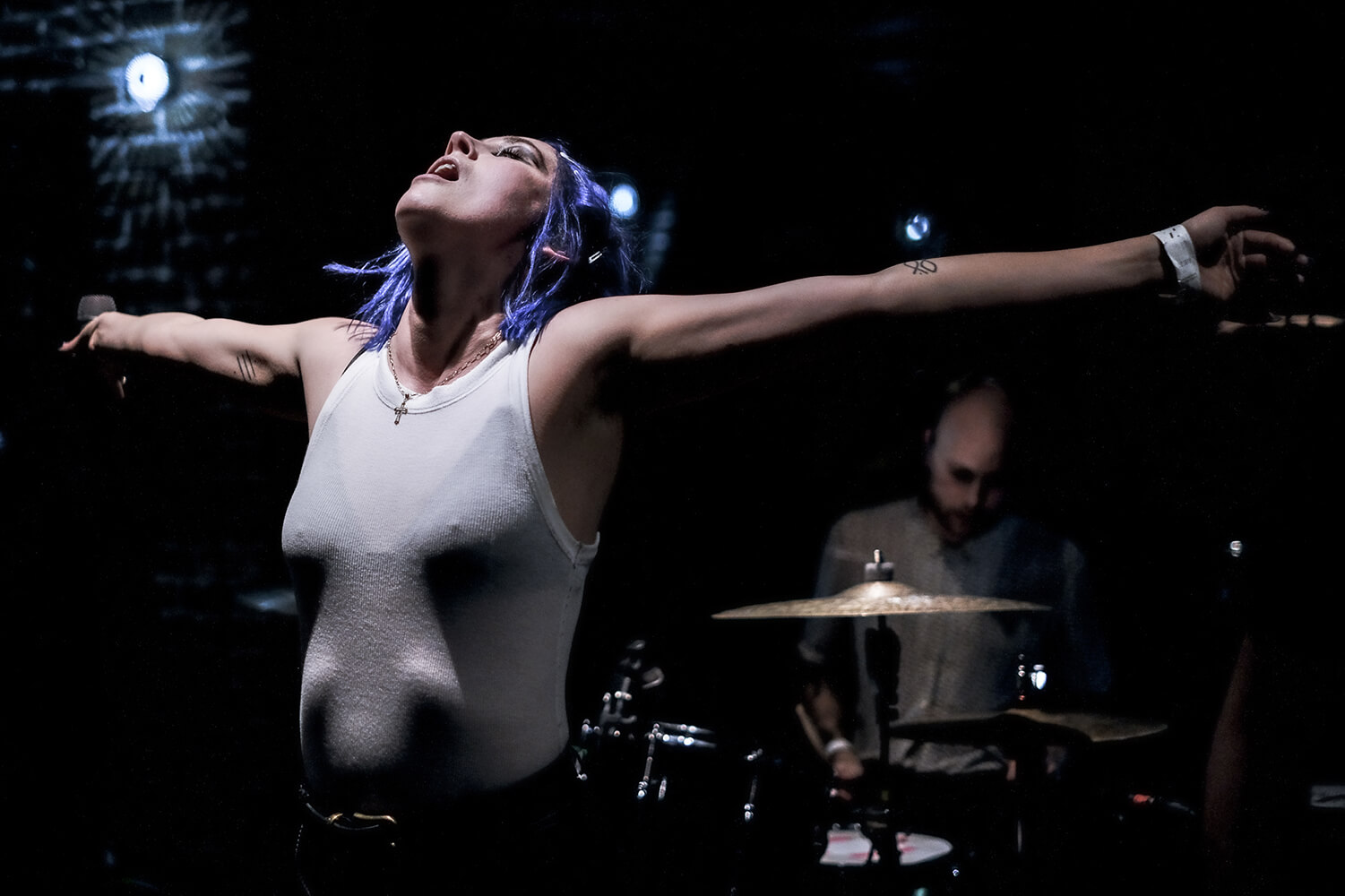 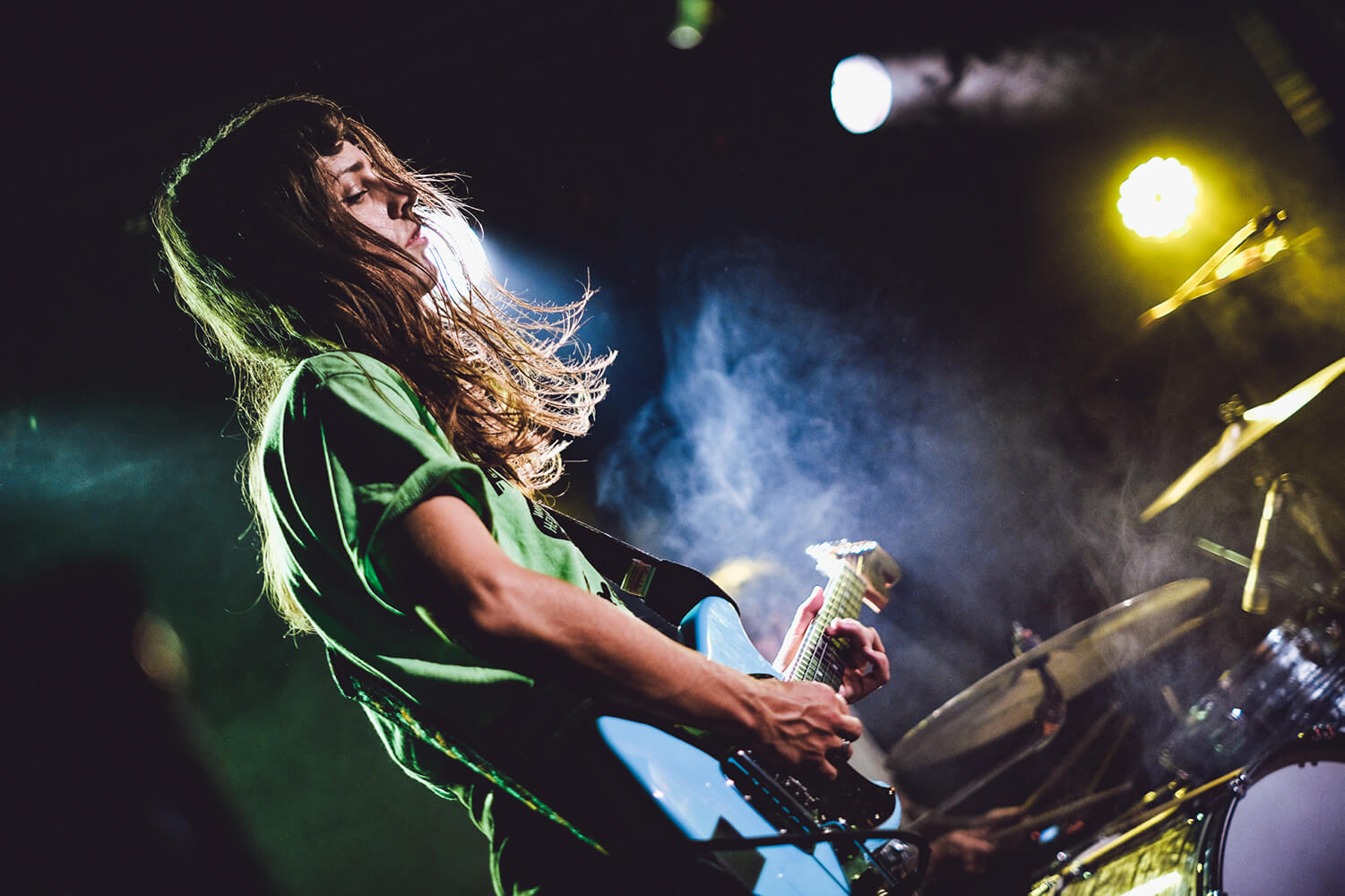 Your network is key. And by that I don’t mean you have to know the people in important positions. It’s more about surrounding yourself with passionate people. People who truly support and inspire you and with whom you can grow. For example don’t shy away from working with a small publication that might not score you the photo passes for the big arenas. They will give you opportunities and the time to learn and network. And don’t forget that even the briefest contact can become an important one in the future. So be nice and respectful to everyone you meet and maintain your contacts!