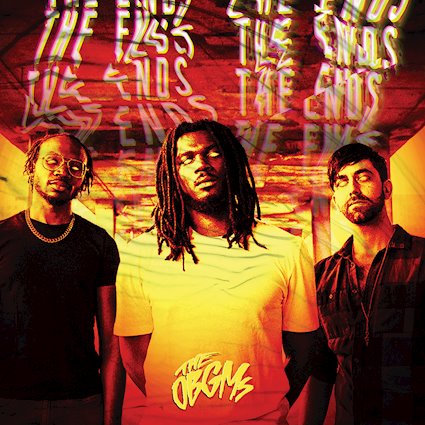 Album Review: The OBGMs – The Ends

Okay, we need to talk about The OBGMs. The Toronto trio are throwing punches with The Ends and they are ALL landing. With one of our favourite starts to any album, this one kicks off with a bongo percussion that’s like a shot of adrenaline, setting the scene for how the rest of this 22-odd minute journey’s going to go down.

Energy isn’t the only thing they have going for them. Feeling like a version of The Strokes with attitude turned up to eleven, The OBGMs play within the realms of garage rock, but that doesn’t stop them from drawing the inspiration from across the timeline into their pocket dimension. There’s a Limp Bizkit type pre-chorus in ‘Triggered’, a Prodigy style DnB intro on ‘Outsah’, a Beach Boys surf rock jangle in ‘Karen O’s’ and grungy melancholy of ‘To Death’. That might sound wild, but in reality, it isn’t until you’re looking for these influences that you find them and that’s mainly down to how seamlessly they transition between genres. You hear bands talk about breaking the boundaries of genres, but many can take a lesson from these guys about doing it in such an accomplished way that the album feels one-hundred percent cohesive and authentic.

There are so many other nice touches to explore on this album; everything from Densil McFarlane’s impassioned voice, especially when that gravelly tone surfaces, to the additional percussion, the aggressive snarls, the rolling drums on ‘Cash’, the vocal effects and clever use of guitar tones come together to create the perfect backdrop for channeling frustration with a confidence that has become a trademark for this band. The latter even translates in the way they end most of the songs so abruptly as if to say ‘yeah, that just happened, deal with it’.

The OBGM’s second album, The Ends, is taking an unapologetic and potent look at the good and bad in McFarlane’s life and by combining it with a liberated songwriting approach, they’ve not only accomplished a great album, but they’re continuing to forge the way for Black artists in a predominantly white punk rock scene and we’re here for it.