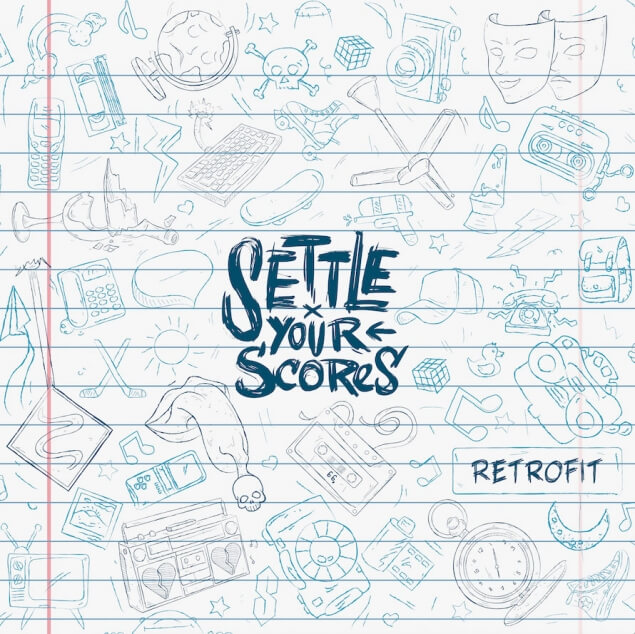 Cincinnati five-piece Settle Your Scores are going back to their roots on their latest record, Retrofit, by working with producer Nick Ingram – who also recorded their debut – to release a record brimming with classic pop-punk themes.

A lot of this album actually feels like a throwback to 2000s pop punk; ‘Meant for Misery’ for one is similar to New Found Glory, but with a hardcore bite, and features everything from uplifting sing-along choruses to lyrics about life being unfair. Whereas, elsewhere on the album, you’d find a Fountains of Wayne-esque intro on ‘Staring at the Ceiling’ and Sum 41 or American Hi-Fi branded pop punk on ‘Streets Ahead’. The latter breaks into some tasteful riffs and vocal harmonies after a swell in volume intros the song – classic – and this one also features a short but sweet guitar solo.

There’s plenty to enjoy on Retrofit including anthemic choruses and catchy riffs and tracks like ‘Jenna Tools’ come in with some classic syncopated pop punk style riffs but breaks off into a refreshingly clean bridge section, which shows off a little more of what the band is capable of. Some other clever bits include the soft crackle of a record player on ‘High Spirits’, ‘QWERTY’ closing with an AOL dial tone which swiftly leads into ‘1999’, and vocalist Christian Fisher upping up the ante with some screamed vocals on ‘Broken Heart Scenario’. All bits that add a more unique angle to this album.

A personal favourite, ‘The Way Things Used to Be’, combines a melodic chorus with distorted guitars and Fisher singing his heart out. There is also a very nice piano melody towards the end that adds a very welcome break from the usual pop punk formula. Overall, the album is a nostalgia hitting ride, harking back to the golden era of pop punk in the late 90s and early 00s, and although it’s not completely reinventing the wheel, there is a magnetism to it. Coupled with unique touches and a modern spin, Retrofit is an album that a lot of people will enjoy.