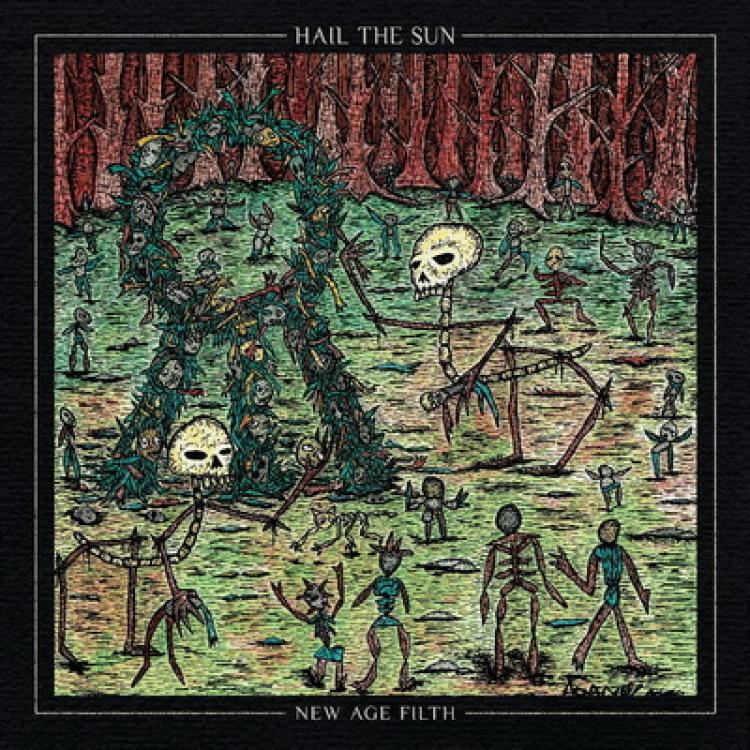 Fans can rejoice this week knowing the newest addition to Hail The Sun’s discography, New Age Filth, is just as epic – if not more – as all that came before. With vocalist, drummer and songwriter Donovan Melero continuing along the theme of reflection, he navigates through love and daily life experiences with an edge of cynicism and a great deal of honesty.

As is traditional with a Hail The Sun record, this one is rife with complex compositions that change so quickly and abruptly that it should be chaotic but actually end up working in perfect harmony. We’d imagine to really appreciate the technicalities of this album, you might need a music degree and yet it remains accessible enough for the everyperson to enjoy the many twists and turns too. And although extremely textural, it’s never exhausting. In fact, the many layers act like paint on canvas to render the most beautiful image of self expression.

‘Domino’, the first song, as an example opens with an eerie music-box type guitar riff before dipping into a Coheed and Cambria-esque verse, a midway solo, a soaring chorus – or maybe pre-chorus? – and then there’s also the incredible drum blast in the final seconds with plenty more going on in the middle. It should be disjointed, but it’s the kind of music that will bring a smile to your face every time you listen to it, further proving Hail The Sun are proficient at writing great songs whilst continuing to play by their own rules.

The rest of the album is much the same in concept; chaotic yet symphonious, but the songs are like night and day. Each track offers something completely different – only ever having extreme skill in common – and where some flirt with heavy post-hardcore breakdowns (‘Parasitic Cleanse’), others have a slightly poppier sensibility to them (‘Solopsism’). The best ones like ‘Hysteriantics’ combine a little of both.

Our standout track has to be ‘Parasitic Cleanse’; ferocious from the word go. The transitions between the different parts are so incredibly smooth, even when it flips between urgent screams to melodic, uplifting sections. Plus, the drumming – as with much of this album and their other material – is inspiring.

It’s hard to do this album justice when everything is utter perfection. Melero’s voice switches between angelic and furious, the guitars are mathy and delicious, the drums are dynamic to the point of manic and anytime you can hear what the bass is doing, you know it’s saucy. New Age Filth is god-tier music from a band who have clearly mastered the art of channelling a-million-miles-an-hour creativity into accessible hooks, demolishing breakdowns and pacy structures whilst still maintaining levity. Ten out of ten.