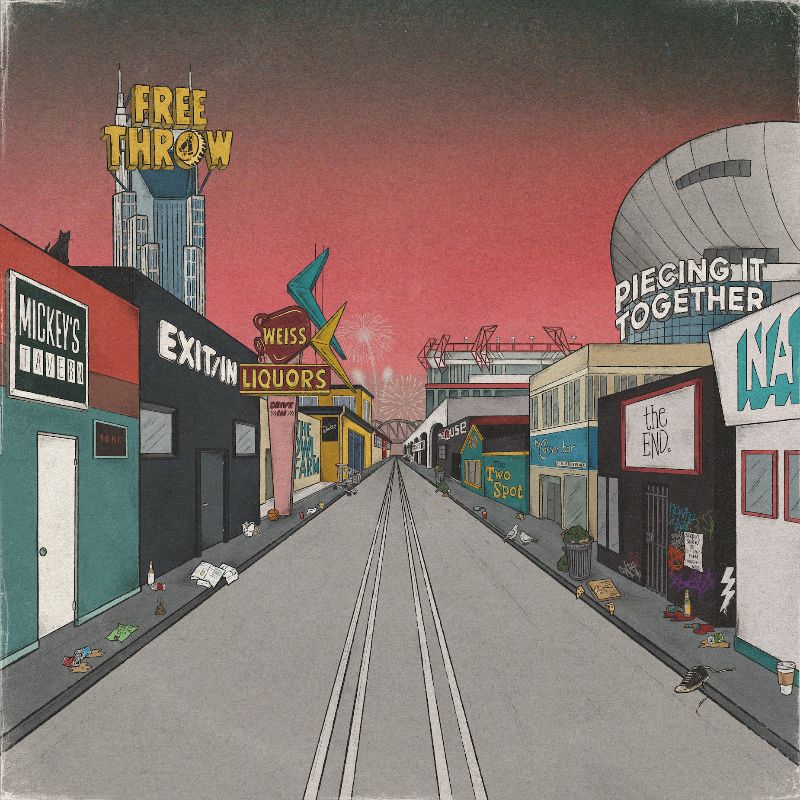 Throughout their career Free Throw have always had a knack for combining the introspective and sensitive nature of emo with the infectious energy of pop punk, and it’s served them well on all three of their previous albums. So what’s different on album number four?

At first glance, not much. The Tennessee outfit still manage that special balance of upbeat melodies and poetic, heart-on-sleeve lyricism throughout the new record, Piecing it Together. It’s when you take a closer listen that you’ll be able to find the subtle, but important, differences.

Where the rest of their discography exhausts heartbreak, mental health struggles, and chasing the next big thing, albeit optimistically, this one shifts to themes of acceptance. “We stopped worrying about what tour we may be fighting for next or what someone else does. We were just writing songs that we really like writing.”

That mental shift has imbued the twelve tracks on this album with an enchanting ease. Melodies that were previously like hurricanes have turned into a gentle, calming breeze as the band lends themselves more to stripped back guitar sounds – the likes of which they have experimented with in the past – instead of the twinkly midwestern riffs scattered throughout albums one to three. Those riffs still exist though, proudly kicking the album off in the intro of ‘Cloud Sick’, but appear a little less frequently to allow space for a sort of campfire rock experience, especially in the second half.

And speaking of forces of nature, Cory Castro‘s voice is still as ferocious as it’s always been. He definitely showcases a gentler approach, a warmth seeping through gravelly tones, instead of that trademark feral scream more often than any of their previous albums. It works well by putting the two in sharper contrast, so whenever he does raise his voice, it feels as though it packs more emotional weight.

With the energy shifted, Free Throw embrace a new chapter of the band, but not without honouring the old. By shaping the branches of their tree, keeping the roots intact, the band achieve an album that shows growth, emotional vulnerability and a comfort in who they’ve become as a band. Underneath it all, however, the band we’ve come to know are still there, battling the ups and downs of life, but by coming to accept it, they’ve allowed themselves the courage to reach new heights.