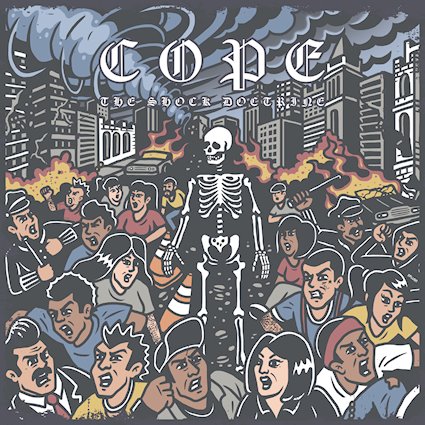 It’s been a long time coming, given the steady degradation of the world around us, but 2020 seems to be the year where bands use their platform – megaphone in hand – to shout about injustice.

This isn’t new, of course, Anti-Flag have been on the frontlines since 96 – Dead Kennedys and Propagandhi reach even further back – but with issues receiving more media coverage, they seem more prevalent and pressing than ever.

Things like gun control are just one of the issues COPE tackle at a breakneck pace in their opening track, ‘Life In 3D’. “The inspiration for this track actually goes way back to 2012, when this Texan dude made the first 3D printed gun and put the blueprints online,” explains guitarist Josh Bowles.

In a Frank Carter-esque intro to ‘Influenza’, vocalist Tom Walker laments about social media, the track capturing the anxiety scrolling through feeds can often induce. And that’s something COPE does really well; bottling the feeling of the subject matter through clever structures and writing.

The urgency of this album is conveyed through every aspect of their self-released debut; from the blast beats and hypnotic riffs to Walker’s vocals and the lightning-fast tempo. It’s melodic and forceful from the start and with nuggets reminiscent of early Alexisonfire and Atreyu, it’s an enjoyable listen from COPE.