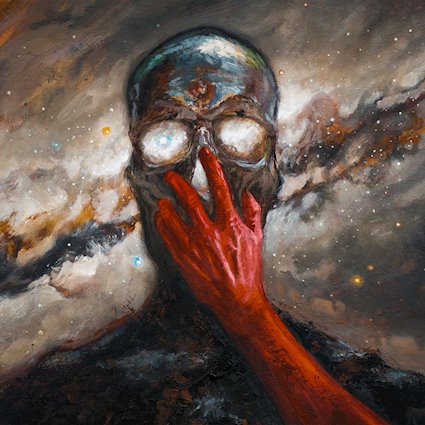 In a world where album charts are for the most part dominated by genres that aren’t metal, Bury Tomorrow have achieved quite the feat by cracking the UK Top 40 with three consecutive albums. Now the metal mastodons are following up on the success of 2018’s Black Flame and its predecessors, with the strength of their sixth studio, Cannibal.

With an album flooded with brutally honest lyrics, conceived from vocalist Dani Winter-Bates personal experience with mental health, it feels fit for the times. Now, more than ever before, we’re ‘normalising’ talking about anxiety and depression and with the honesty of Cannibal, Bury Tomorrow are hoping to facilitate that conversation.

On ‘Choke’ – the opening track which also happens to be our stand-out song – Winter-Bates sings “find me trapped inside my head”, tapping into that feeling of suffering that often walks hand in hand with ill mental health. He does so with unrivalled emotion and continues to do so throughout Cannibal.

They also seem to be leaning into a more melodic side of Bury Tomorrow, which not only makes for an impressive change of pace, but also produces some of their sharpest work instrumentally. It feels evolved and extremely accomplished with hints of Killswitch Engage and some of Dani’s most dexterous vocal deliveries.

There’s so much more to say about this album, but we’ll let you experience all it has to offer for yourself instead. Just know, you’re in for one hell of a ride as Bury Tomorrow puts pedal to the metal with this album.